Chat with us, powered by LiveChat Skip to content
How Long Will a Roller Bearing Last in the Absence of Lubrication? 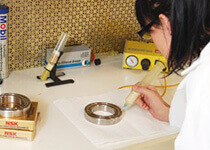 Tom M. a maintenance supervisor at GSO &M sent us the above question.

Some of our original response to the question above was incorrect. We recently received an email from a reader who pointed out our error. It is our desire to publish correct and accurate information. So please accept our apology and note the corrected response below.

Our thanks goes to Roland Jollivet who wrote us the concerning our original answer:

“That is not true at all. The rollers will travel at a speed that is a function of the two diameters. If they relied on slip to operate, then planetary gears would never work.

However, there is slip within a ball race, due to the ball laying within a channel. When the ball is compressed under load, it will contact the surface with a greater area than a single point of contact. Thus some areas of contact must slip.

Here is our revised response:

The short answer to this question is not very long at all. The exact life expectancy depends on a number of factors such as load, speed, configuration as well as bearing material.

Rolling element bearings are referred to as anti-friction bearings. The elements roll rather than slide. But even rolling elements can generate some friction and heat. This happens for several reasons.

The first reason is elastic deformation as noted by Roland.  As loads increase the rolling elements are slightly deformed and flatten out a little. Races also deform and generate a small depression at the contact area causing a less than perfect rolling surface. And ball bearings also generates minute contact surfaces to the side that must slip past each other.

Another reason has to do with microscopic irregularities in the material surface.  Under high magnification the very smooth surfaces of bearings look like jagged mountains peaks called asperities. Without lubrication or with improper lubrication these asperities contact each other and break off generating contamination. The contamination causes more asperities to break off and more contamination. That condition can also result in adhesive wear or what we commonly refer to as galling. These actions cause rapid deterioration of the bearing surface and subsequent failure.

Proper lubrication provides a thin, hydrodynamic film between the rolling elements and the races. This film prevents metal-to-metal contact between the rolling elements and the races.  High quality lubricants also tend to fill the microscopic voids between asperities greatly reducing wear. So when bearings are operated with proper lubrication and within design envelopes they should provide many thousands of hours of operation; without lubrication, not so long.